One dark and chilly night, back in 1982, my brother and I were to be found holed up in our local pub supping pints of bitter and peering intently at a very large map. 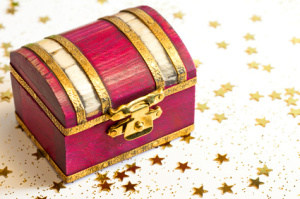 Oblivious to all others in the pub, we were suddenly thrown in a state of high excitement, as staring at the unfolded Landranger map draped over the pub table before us, we realised that we had just spotted the final clue which would lead us to a veritable fortune!

I remember as though it were yesterday, cracking that final clue to a treasure hunt which had engrossed us for the previous few weeks.

And now all I had to do was to climb in my car and drive all the way from Hertfordshire to Yorkshire (of all places) to unearth and claim the buried treasure – a key to a brand new Ford Sierra.

Yes, I know, it sounds as if we had stayed in the pub far too long and were gripped by a kind of madness. Perhaps we were mad… but if so, then we weren’t the only ones to be gripped by ‘Treasure Hunt’ fever during that heady decade.

To help promote the newly launched Sierra – the replacement for the Ford Cortina – Ford’s PR Company came up with a cunning plan: a UK-wide treasure hunt with eight brand new Ford Sierras up for grabs as the treasure. They concealed the keys to the eight cars along with documents to claim ownership in eight small caskets, and buried them at secret locations dotted around the country.

To win a brand spanking new car, the general public simply had to crack the clues leading to their secret location… and we had just done exactly that!

I knew for certain that the key we were after was hidden in the centre of an old granite mill wheel discarded by a hillside track leading up to The Heights of Abraham in Yorkshire. Even though it was nearly midnight, I excitedly started to load my car in order to set off without delay. I figured that I would drive through the night and be at my destination in time for sunrise – oh, the energy and enthusiasm of youth!

One last thing contestants were advised to do before setting off on such a journey was to check a telephone hotline, just to make sure that the prize had not already been found. And that was when I was dealt a devastatingly disappointing blow…

…The key had just been found! We had missed out by just a matter of hours. And to rub salt into the wound, it had been found in the exact location we had deciphered that same evening.

Well it wasn’t long before I dusted myself down and got cracking on a few of the other public treasure hunts which swiftly followed, due to the popularity of Ford’s treasure hunt car frenzy:

For a few years during the 1980s the world truly did seem to go mad for these ‘open to all’ treasure hunts, with some contestants taking extreme actions in order to solve clues.

One person was convinced that some treasure was concealed half way down a cliff and decided to abseil down it using mountaineering equipment in order find his prize – he was to be disappointed.

I personally knew someone who was found by the police ‘digging for treasure’ in the central reservation of the A1 (not me I assure you), again looking for treasure – he was arrested.

After a few years the whole treasure hunt thing seemed to fade away. But now I sense that the same frenzy seems to have returned… this time supported by multi and social media to give instant mass appeal.

In August of this year, a 1.14 carat diamond was shot into space attached to a balloon, to promote the London diamond company 99 Diamonds.

The helium balloon, the diamond and parachute were meant to be trackable, but the GPS signal was lost somewhere over Lincolnshire. But literally only a few days ago – 23 December – a delighted Mr Bell from Brattleby, Lincolnshire, with the aid of his springer spaniel, pulled a box containing the £12,000 diamond out from under a hedge – good dog!

Then there is James Frey’s new novel Endgame: The Calling, which is a treasure hunt within a story: the first reader to solve it wins $500,000 in gold coins, currently on display at Caesars’s Palace in Las Vegas. As I understand it, this book is the first in a trilogy with two more books and similar prizes to follow.

Finally, and not to be outdone, I have created my own treasure hunt. Within the pages of my website The Profit Box, I have buried clues to 12 items of treasure. This hunt is loosely based on the popular Christmas song ‘The Twelve Days of Christmas’.

Each of the 12 items of treasure are collectible in their own right and are waiting to be found and claimed by members of the Profit Box. This treasure hunt will only run for the duration of the ’12 Days of Christmas’, and will close at Midnight on 6 January 2015.

To enter this free (to members) treasure hunt, visit The Profit Box. Clues to the hidden treasure, in total worth hundreds of pounds, are buried within my latest blueprint and are just waiting to be won.

If you are not yet a member and fancy trying your hand at my ‘Vintage Collectibles Treasure Hunt’ then you can easily join at my low-cost trial offer price – click here for details: http://www.theprofitbox.co.uk/specialoffer/

Good luck and until next time, happy hunting!