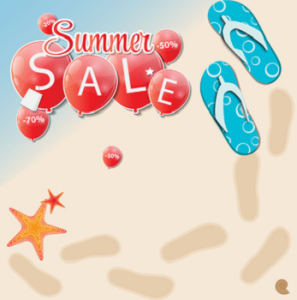 Right now, here at the end of July, it’s the perfect time to buy.

Let me explain exactly why….

Over the last six years of buying and selling on sites such as eBay and Amazon, I have noticed regular and consistent peaks and troughs in not only my sales, but also other sellers around me.

The fact that I can almost set my clock by the arrival of such predictable trading patterns makes me smile…There almost seems to be an order in the universe!

Mostly these patterns are commodity specific, with a good deal of seasonal variation thrown into the mix, which end up causing individual trends, most of which are obvious.

For instance, I was able to sell a very expensive inflatable swimming pool at the end of last summer, with ease.  Two days later when the weather broke, other similar pools couldn’t be given away for love nor money.

Timing is everything in the retail game.

Sometimes sales can be affected by micro-factors, such as important national events.  Take the 2012 London Olympics as an example.  Viewing figures for the opening and closing ceremonies went through the roof.

It’s at times like these, when the gaze of the public, just like the Eye of Sauron in Lord of the Rings, swivels away from the shops and the Internet for a few precious minutes, is when you can swoop in and make a killing.

During that same opening ceremony I won an online auction for a matter of a few pounds, which should in reality have cost me two or three hundred pounds.  Poor timing I guess on the part of the seller, allowing their auction to end in that crucial hour.

Planning ahead is essential.

Most retailers, both online and offline, have their mental calendars permanently set six months ahead of time, so their merchandise is perfectly poised to meet the expectant market when the appropriate season arrives in real time.

I have watched every year as my online sales take off like a space rocket in the last week of August…as yes, you guessed it, that’s when the Christmas buying season (sorry to mention the ‘C’ word in the middle of summer) kicks off big time.

This seasonal buying trend happily trundles along until the Post Office announces that parcels might not be delivered in time for Christmas, at which time you can hear literal skid marks in the snow as the market dies on the spot.

And then strangely enough, after Boxing Day, when you would expect buying to subside for a while as cash is a bit tight, the market surprises us and does the polar opposite, with consistent sales being notched up right through until early spring.

Then in the month of May our sales go all wobbly and unpredictable.

But one thing I do know, as this period of jitters happens every year, is that the period from mid-July until the third week of August is the absolute perfect time to buy online.  The reasons again are obvious; people are distracted by summer outdoor activities and holidays.

A few days ago I won an eBay auction for a large lot of music CDs, for which I had almost zero competition. I was as pleased as punch.  Now had that same auction happened in the middle of October, well I don’t think I have stood a chance of winning it at a sensible price.

I collected those CDs, and Mrs B is happily tapping away on her computer as I speak, listing them for sale online.  I buy and sell a LOT of CDs.  I go into detail in my website, The Profit Box if you are interested to learn more about this compact little income stream.

Music CDs are a perfect commodity, as they are small, easy to store and cheap to pack and post.  But most of all I like them because they are regular and consistent sellers…but you do need to know which are the best music genre to focus on, and which ones to leave well alone.

That’s it for this week.  Keep your eyes peeled for some online bargains, and enjoy the sunshine.