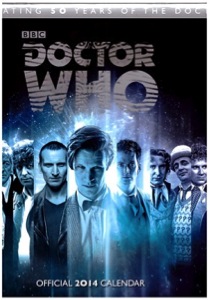 Most times when you visit the supermarket you expect to part with a sizeable chunk of money.

But if you are eagle-eyed enough, you can sometimes end up profiting from the supermarket giants.

Occasionally they slip up, and when they do, you can swoop in and bag yourself a bargain, which you can then turn into hard-cash profits.

Here is a case in point

You may recall some months ago I wrote a piece on how anniversary memorabilia can become collectable, especially when items match some basic rules of collecting, namely:

By way of example, I mentioned the ever-popular and long-running television series Doctor Who. Last autumn this classic programme celebrated its 50th anniversary.

As part of the celebrations, the BBC produced a range of Doctor Who anniversary merchandise, e.g. mugs, books, replica models and calendars.

The trick, of course, was to work out which – if any – of these items were worth collecting.

I was in my local Tesco supermarket store last week, when I spotted a whole bunch of calendars piled up in one of their big yellow discount bins. All of the calendars were still brand new and in their original shrink wrapping.

Amongst some fairly mundane calendars I found one celebrating the 50th anniversary of Doctor Who.

All the calendars had been discounted from their original retail price, right down to £1.25 per item.

So I bought one as an experiment, as it matched my basic rules of collecting: it is most certainly a popular topic, the quality of the product was excellent (great pictures of all Doctors, past and present), the price was a steal at £1.25, and as for the supply of the product…

Tesco no doubt, also follows similar rules for stocking products and probably considered this item no longer popular, as it was out of date: we are now at the beginning of April and this is an annual calendar!

So they stopped stocking any more units and dramatically reduced the price in order to shift the remnants. This ticked the last box in my criteria for collecting: the supply is now limited!

Well, this, to my mind is where Tesco made a blunder… because some products when they become out of date are transformed (just like the Doctor) from being an everyday useful item to becoming a collectable item!

In truth, Tesco probably are aware of this fact, but as they don’t have a ‘collectibles’ department, they are happy to clear their shelves for new items which are more of a match to their business profile.

When I got home I keyed the product details into Amazon and found that the lowest price that these calendars were selling for was £9.99. So I listed mine at £9.98 and waited.

Within two days I got an email alert to say that my calendar had just sold!

After deducting all my costs – the original purchase, Amazon fees and packing & postage – I was left with a net profit of £6.36. That’s just over a 500% return on my original £1.25 purchase price!

What a great return, which I was able to generate by moving it away from a standard retail environment to one which recognised the value of collectibles.

Of course, I immediately shot off to Tesco and bought up a further nine copies…

That’s all that were left of the Doctor Who calendars. They take just seconds to list on Amazon and when they all sell, which I’m confident they will, I will have earned approx. £64 for very little work indeed.

Now, these kind of deals are definitely out there to be found, and as I have hinted at before, I am working on an exciting new programme with Canonbury Publishing which will allow me to alert you to similar great deals, both new and collectible, which you can profit from without having to do any of the research yourself.

In the meantime, check out your local superstore to see if you too can pick up a profitable piece of Doctor Who memorabilia.

Until next week, happy hunting.