One of my earliest childhood memories involves watching Wimbledon’s tennis coverage with my mother on a rather small, flickering, black and white TV screen.

In 1962, Rod Laver had just won his second Men’s Final on the trot, and as my mother is a fellow Aussie, she had good reason to cheer.

I’m sure the reason why this event embedded itself in my memory is because it seemed to go on forever and it was, as I recall, always sunny outside, which is where I would rather have been.

Despite that slight frustration, ‘Wimbledon fortnight’ settled in my memory as a happy annual event, synonymous with warm, long, lazy days of summer, the drone of pollen-seeking bees and the sounds and smells of freshly cut grass.

Imagine my delight when, 30 years later, in 1992, as part of my antique and shipping work, I was invited to quote on moving the Wimbledon Lawn Tennis Museum safely into storage.

This was to be completed at the same time as a much overdue enlargement of the Centre Court grandstand.

As the move progressed, I got to know the staff at the All England Club very well, and in recognition of a job well done, I was sent a pair of Centre Court tickets for the Women’s Finals – an unexpected but wonderful surprise.

I decided to ask my mother, because of those early TV memories and the fact that she still loves to watch Wimbledon.

The day before the match, I bumped into an old friend in the street, and upon hearing that I was the proud owner of a pair of Wimbledon Finals tickets, he promptly offered me £600 cash for the pair.

What to do… I phoned my mum to see if she was still interested in going (I didn’t mention the cash offer).

Was she interested? She was positively bubbling over with excitement, and had even made sandwiches, for goodness sake!

So the following day, Mum and I were to be found munching our sandwiches, perched in the best seats that Centre Court could provide, as we watched Steffi Graf beat Monica Seles in a rather convincing fashion… Well, she is my mum after all!

So, one way you can earn money from Britain’s seasonal sporting events might be to act as a ticket tout… but I really don’t recommend it.

What I do recommend, however, is to find associated sporting memorabilia and put it up for sale just before the start of the event.

Why should you bother doing this? Well the simple fact is that people’s buying habits are influenced by such seasonal events. Why else do you think retailers spend so much money dressing their shop windows with such frequency?

Beyond Wimbledon, here are a few other firm sporting favourites (not a comprehensive list) whose arrival on the seasonal calendar, always help to boost sales:

The trick is to keep these sporting events in mind whenever you are out buying, at all times of the year, and then snap up any sport-related media or memorabilia found at a good price.

Then, you need to get your timing right and have your items not only listed, but listed at the most competitive price (on Amazon or eBay) just as the sporting interest starts to kick in.

Here are a few examples of sporting-relating sales I have made on Amazon: 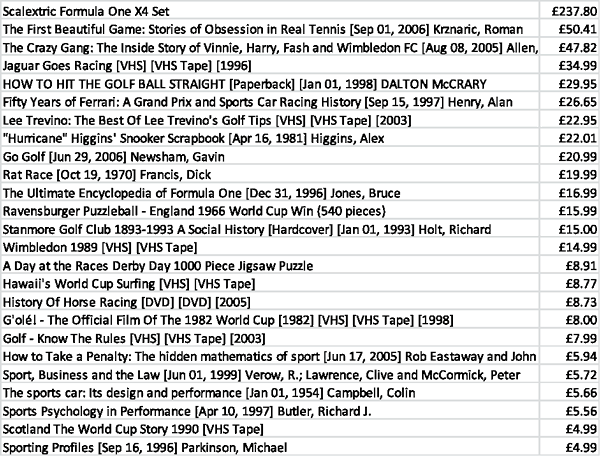