Now is a great time to start collecting books because in recent years ‘collectable’ books have increased in value like no other time before. 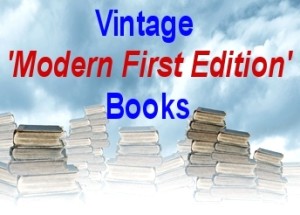 However ‘Modern First Edition’ book price rises have been the most dramatic of all, which is why they are extremely attractive to collectors, investors and indeed anyone with an eye for a handsome profit.

‘Better than a bond, more interesting than an Isa and more satisfying than shares – antiquarian books and modern first editions have been attracting attention from investment-minded collectors.’ Times Online

Subsequent ‘impressions’ or print runs, of the first edition, are considered less valuable than the very first impression. When there is a second printing, that then becomes a ‘first edition, second impression’, and so on for the third, fourth and subsequent printings / impressions.

There are four key factors which have fuelled recent high prices of modern firsts:

True book collectors are usually interested in the first edition and first printing / impression of a title, because it is most likely to be the work that has first established an author’s reputation and is the first state that the book becomes available in, becoming more difficult to come by as time passes.

Usually first edition printings are produced in quite small quantities in their first print run, compared to later printings. This is so they can test the market, especially with new and unknown authors.

Whereas a publisher printing a book by a ‘tried and tested’ author, e.g. Alistair Maclean, will likely print a lot of copies in the first print run, in the sure knowledge that they will sell in good numbers.

Take the very popular author J.K. Rowling. No one knew her potential when she was touting her first title – Harry Potter and the Philosopher’s Stone – around the well-trodden path of publishers. Bloomsbury Press were the far-sighted publisher to take her under their wing, but to limit their financial exposure they only printed 500 copies in their first print run, and most of those went to libraries rather than to shops.

The value of any book diminishes almost entirely beyond the first edition / first impression, unless the author or book becomes extremely popular, as in the case of the very early Harry Potter books, especially given the small early print run.

Harry Potter instantly caught the imagination of young teenagers and word spread like wildfire, creating a sound financial basis for a much larger second printing, and so on… the rest is history. But, try and find one of those first ‘original’ copies – almost impossible – hence the huge price tags that one hears about…£5,000 and higher!

Demand ‘slacks-off’ when publishers print excess volumes – Bloomsbury effectively destroyed the market for first editions of the 4th & 5th Harry Potter books by printing them in such enormous quantities. You always know when this point has been reached: when it becomes quite easy to pick up first edition copies of books for less than the original retail price.

Other Outstanding Examples to Whet Your Appetite!

Whether the work of an author has over the years become a longstanding classic, or whether a particular work has shot to stardom literally overnight, there are always outstanding examples of each genre that can set your pulse racing:

At lower, but still very interesting levels, some other first novels include:

Two of my Own Case Study Examples:

Over the years I have earned a considerable amount of money from buying and selling modern first edition books and have derived a great deal of pleasure at the same time from having such interesting items pass through my hands.

To achieve these kinds of profitable returns, it just requires a little bit more knowledge than the next person.

I have posted a full business blueprint, containing an interesting mini-video series on this very topic, to my Profit Box website, detailing how you too can start gaining this knowledge and spot great earning opportunities within the modern first edition book genre. The videos actually show live examples of my books being sold on eBay… It really is quite revealing!

If you are interested to learn more about profiting from modern first edition books, please click here.

I will catch up with you again next week.