I have sat down every week now for the last two years to write this Maverick Money Report newsletter, and I really enjoy it. Yet there are times when I do wonder what my next topic will be about… 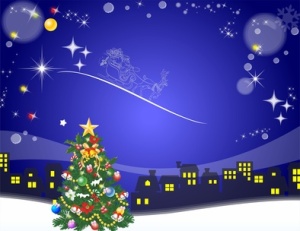 …And then suddenly I find inspiration, either from something I read about or something I notice from everyday life.

As this is my last newsletter before Christmas, I wanted to relate a seasonal story… A true story I might add, which happened to me one night when working from home.

This tale won’t reveal riches in the usual sense of the word, but if you read right to the end, I will reveal details of some undiscovered treasure!

This story took place about five years ago at home. We were in the middle of a very cold winter and I was working in my study which has a window looking out towards our hedge, with the road beyond.

It had been snowing for the previous few days, with the result being that there was compacted sheet ice on the road, with snow drifts either side. It was about 10 o’clock at night and although dark, there was a faint white mist that was slowly rising from the cold ground. I hadn’t seen or heard a car pass our house for ages, as frankly it was too dangerous to drive.

Suddenly the still of the cold night was broken by the roar of a very loud and powerful car revving and skidding on the icy road outside. Then there was a very loud bang as the car skidded and smashed into our hedge just a few yards from my office window.

There was quiet for a few moments, except for a faint hissing sound of escaping radiator steam. The headlights were pointing at a bizarre angle up through the hedge into the night sky, as though search lights were trying to pick out night bombers in the darkness.

It had sounded a shockingly bad crash, and I hauled on my wellingtons and raced outside to see if anyone was hurt. The car must have been going at some speed, as it had skidded with such a force that it had swiveled around at 180 degrees, facing the wrong way and was half embedded in our very thick and thorny hedge.

If I had expected some half-cut hooligan to be at the wheel, I would be wrong. Slumped in the front seat were an elderly couple, who appeared concussed… At the very least they were badly shaken up. With the help of my wife we managed to get them out of the car and my wife took the old lady into our house for a hot drink.

The old fella insisted that he stay outside with me to try to get his car out of the hedge. The problem was that between the road and our hedge was a large ditch, and his car had been travelling with such force that the front two wheels of the car had gone over the bank and into the ditch, effectively beaching the chassis of the car on the bank. I tried to dig some of the bank away to give the wheels some purchase, but it was cold and I seemed to be getting nowhere.

A few neighbours came out to help, but seemed to be spectators rather than helpers. The ground was frozen solid just like concrete, and the spade just sprang back at me, jarring my shoulder. I was exhausted and said half out loud something like: “It would take a miracle to get this car out of here tonight.”

A few moments later, a rumbling could be heard further down the road. “Oh, no,” I thought, “not another idiot going too fast.” Around the bend came a non-descript white van, and without a slip or a slide, it pulled up just short of the crashed car, which still had its headlights staring through the hedge at crazy angles.

A lithe man got out of the van and made his way over to us, and introduced himself as Paddy. He had such an outrageous Irish accent, I found it almost unreal.

“Now, you look like you have a spot of bother here. If you ask me, what you need to do is start digging at that ditch dair, so as to release the front wheels.”

I explained that this was exactly what I had been trying to do, but without success. “Ah, dat’s not a problem at all. You see, I have a big shovel in that dair van, and I know I can help, so let me have a go!”

Without waiting for a response, he disappeared to his van to collect his shovel. Returning he announced: “Now give me some space and let the dog see the rabbit,” and started to dig with the strength and determination of a steam engine. It was as if his spade was cutting through butter. The turf and soil was flying left and right, and very soon the car was free.

I was preoccupied talking to the driver of the car for a moment, telling him that I would fetch his wife from inside. When I turned around to thank my Irish friend, he was gone, and so was his van; not a sign of him anywhere and I didn’t even hear him leave.

He didn’t drive past me, as the road was still blocked and he would have taken ages to have turned around to go back the way he came as the snow was too deep… He just vanished into the snowy mist!

It is said that we all have a guardian angel… Well perhaps we have.

Now, before I close, I did promise to talk about some ‘undiscovered treasure’. In fact that might not still be true, for you see I have just updated my Profit Box website with the last business blueprint before Christmas, and it features ‘hidden treasure’ in total worth hundreds of pounds… and some members may already have found some of it.

If you are not yet a member and fancy trying your hand at my ‘Vintage Collectibles Treasure Hunt’ then you can easily join, at my low-cost trial offer price – click here for details: http://www.theprofitbox.co.uk/specialoffer/

May I take this opportunity to wish you and yours a very Merry Christmas and a happy and healthy New Year.