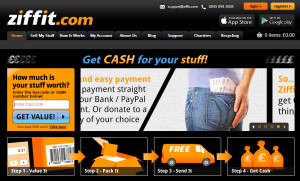 One of my bonus items featured within TheProfitBox.co.uk identifies the top trade-in sites for offloading your unwanted media, for a quick cash return.

These are sites will give you an instant quote for your CDs, DVDs, Games & Books.  The prices are lower than you would get selling on sites like Amazon and Ebay, but you do get an assured cash offer, without the long wait for your items to sell.

I use these sites to clear my CDs which are not cost effective to sell on Amazon or Ebay.

Take a popular CD for example.  Due to it’s popularity a large number of new CDs might be initially released.  But when these all appear on the second-hand resale market, there are often so many similar competing titles that they usually end up selling for as little as one single penny.  This happens quite often on Amazon.  Under these circumstances I would turn to trade-In sites such as MusicMagpie.com or Ziffit.com – see the bonus article for full details.

Trade-in sites will offer between 5 – 30 pence per CD at the low-end of their price scale, depending on the title’s popularity and how many copies they have in stock at any one time. So if the same title is only worth a few pence on Amazon, then I am pleased to accept the higher trade-in offer.

Before the summer the trade-in sites were happy to buy-in CDs from the general public, with prices starting at 25 – 30 pence per CD.

During the summer period I warned you to hold off selling your unwanted media, as the prices had fallen dramatically and were scraping the bottom of the barrel at around 5 pence per CD.  This was because everyone was on holiday, with time on their hands, and were busy trying to raise cash for their summer holidays.  With so much stock flooding in, the trade-in sites dropped all their prices across the board.

As forecast however, the prices are now creeping back up as we edge into Autumn.

I have just received minimum cash offers from Ziffit.com averaging at 20 pence per CD, which is a vast improvement.  Remember, these are my clear-out CDs – of no use elsewhere – so I am happy to accept Ziffit’s offer. If you have a normal collection of CDs that you want to clear quickly, then they will usually offer you a much higher average price…anything up to £3.00 per CD, so it’s well worth checking out.

Cash Bonus Tip: If you use Ziffit.com before 15th October, you can take advantage of their promo code: SPRINGCLEAN14.  You can redeem this code on check-out and be awarded an additional 10% bonus cash offer (limited to the first 300 people using the code).